Health workers have an important role to play in raising community awareness of HIV, educating clients about HIV, offering testing, and caring for people living with HIV. This can be overwhelming at times. Here’s some useful current information about HIV prevention, testing and treatment, and on providing support to people living with HIV. 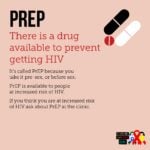 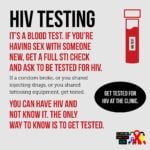 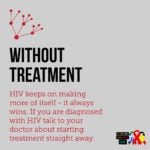 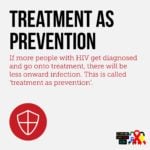 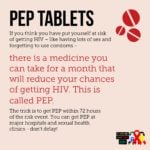 Its important to offer HIV testing to the right client group at the right times.

Normalising HIV testing:
It is useful to normalise HIV testing as much as possible.

When offering an HIV test it can be helpful to soften the suggestion by saying something like “let’s check you don’t have HIV” OR “we offer HIV to all clients on a regular basis – you know much about HIV? … “. 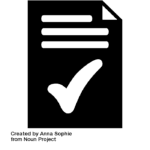 Before testing a full sexual, drug use and past medical history should be conducted to assist in determining whether an HIV test is indicated.

* Understand the HIV testing process and why they are being offered a test, and what it means if the test result is negative or positive to HIV
* Some people may be used to providing informed consent but for many others with little understanding of HIV or their potential risk of exposure
* HIV testing may be new, frightening and associated with shame stigma or judgement.

Types of HIV testing
Most HIV testing in Australia occurs in laboratories, on a sample of blood sent by the person’s clinician.

Antibodies are usually produced between 2 and 8 weeks after infection with HIV. If the test is positive another test is done to confirm the result.

In Australia rapid HIV testing or point of care testing is available.

* These tests are performed using disposable kits, which test either from a finger-prick sample of blood or saliva collected from around a person’s mouth.
* These test can show a result in approximately 10 to 20 minutes
* Rapid test results are not definitive. If a rapid test is reactive, a confirmatory laboratory test is needed, on a full blood sample.

Rapid testing is available at some sexual health services, NGOs like AIDS Councils and some hospitals and clinics. Some people purchase rapid tests online, and test at home.

Health Care Workers should be mindful of the HIV test window period, and explain the window period to patients.

After someone has been exposed to HIV it can take up to three months for HIV to be detected in the person’s blood. This means that to be fully sure that someone does not have HIV after an exposure to HIV they have to be tested after the window period.

Once a person has been diagnosed with HIV, their clinic or doctor will explain treatment options and refer them to an HIV specialist doctor or public hospital for HIV antiretroviral treatment to be prescribed.

HIV antiretroviral treatment drugs can only be prescribed by HIV specialist doctors who have undertaken special training, or by doctors who work as part of a specialised hospital unit. These doctors are sometimes referred to as ‘s100 prescribers’.

* A person who has just been diagnosed with HIV will be upset and may not be ready to talk about treatment straight away.
* However recent evidence shows there are many benefits from commencing treatment as soon as possible after diagnosis.

Australian treatment guidelines now recommend that all people with HIV be encouraged to start treatment, regardless of their viral load or ‘CD4 count’.

Providing support to people with HIV

Health workers’ role
Aboriginal health workers have an important role in supporting people to deal with an HIV diagnosis, and referring people on to agencies that can provide professional counselling. Many people will have other health and social issues to deal with and an HIV diagnosis may seem like the last straw. Health workers can assist in making sure people understand that HIV is a serious but treatable medical condition, and dispel the myths about HIV that fuel stigma.

Family support
Family support can be great but most people in the community don’t know much about HIV. Many people think HIV has ‘gone away’, or that it only affects one group like gay men, or that it won’t get us, or that it’s still is a deadly disease, or that it can be spread by sneezing or sharing food. If people need support to tell their family they have HIV, it may be useful to guide them through some of the information on this website. Help them understand HIV, and the good news on modern treatment. Think about talking to local clinic doctors and nurses about holding education sessions for non-medical staff on HIV and HIV treatment. These sessions can be great for learning the latest on HIV prevention and treatment, and for sharing ideas on how doctors, nurses and health workers can work together to provide care and support to people living with HIV and their families.

Letting partners know
Many people dread telling their partner they have HIV. It can be helpful for people to make an appointment to see their doctor or counselor with their partner.

HIV cure research
There is no cure for HIV yet.

Developed by the National Association of People with HIV Australia in association with the Doherty Institute, the Alfred Hospital and the Kirby Institute. The hivcure.com.au website is part of a partnership between community organisations and scientists to ensure that people living with HIV in Australia can gain and access information on progress toward a cure.

Click on the link to go to our Health Promotion Resources Page.

HIV prevention is no longer just about using condoms.

Here are some of the new ‘tools’ – the terms and what they mean:

PrEP
PrEP or pre-exposure prophylaxis is where someone who doesn’t have HIV takes HIV antiretroviral medication (Truvada or a generic form) to protect themselves from getting HIV.

PrEP isn’t for everyone – and for PrEP to work, the person must take their doctor’s advice about dosage. Also, PrEP only works to prevent HIV – not other STIs. STIs are very common in our community so it’s important to continue to reinforce the message that safe sex is sex with a condom.

PEP is where a person who has been possibly exposed to HIV is given a short course of HIV antiretrovirals to prevent HIV. PEP works by killing off any HIV in their system.For PEP to be effective it must be commenced within 72 hours or 3 days of the exposure.

Treatment as Prevention or U=U
The focus of decisions about treatment commencement must always be improving the health of the person living with HIV.

Click on the link to view or download our factsheet on Treatment as Prevention (TasP): TasP factsheet 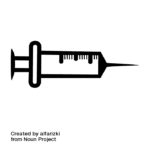 Needle & syringe programs or NSPs are services that provide disposable syringes to injecting drug users. This actively discourages sharing of equipment and is referred to as a harm reduction policy. Introduction of NSPs in Australia is the main reason why rates of HIV among injecting drug users have remained low compared to other countries. Rates of HIV among Aboriginal and Torres Strait Islander people who inject drugs are higher than for non-Indigenous Australians, so it’s important to encourage people in our community to access NSPs and not be shamed – tell people that NSP staff will know they’re doing the right thing and won’t judge or lecture them about using drugs.

Opioid substitution therapy or OST is where people who have become dependent on an illicit drug are prescribed a substitute drug – this is called pharmacotherapy. In Australia the main pharmacotherapies used for people with opioid dependence are Methadone, Buprenorphine, and Naltrexone.

Detox and rehabilitation programs can assist people to cease, reduce or stabilise their use of illicit drugs, prescription medications, or alcohol. Programs can involve counselling and group support, residential rehabilitation, detox as well as pharmacotherapies such as methadone, buprenorphine, or naltrexone.