With diagnoses and rates of HIV in Aboriginal communities at an all-time high since 1992, this year’s Aboriginal and Torres Strait Islander HIV Awareness Week (ATSIHAW) is more important than ever. The role of ATSIHAW is to promote action and prevention of HIV in communities across Australia.

ATSIHAW will be launched in Canberra for its third year on Wednesday, 30 November at a breakfast hosted by the Parliamentary Friends of HIV/AIDS, Blood Borne Viruses and Sexually Transmitted Diseases, and Federal Minister for Health, the Honourable Sussan Ley, and Assistant Minister for Health and Aged Care. The Honourable Ken Wyatt will also be in attendance, as well as Prof Sharon Lewin, Chair of the Ministerial Advisory Committee on Blood Borne Viruses and Sexually Transmissible Infections and Ms. Pat Turner, Chief Executive Officer of National Aboriginal Community Controlled Health Organisation (NACCHO).

New national data has revealed that the rate of HIV notification among Aboriginal and Torres Strait Islander people is now more than double the rate for the non-Indigenous Australian-born population. This rate has increased each year for the last five years, while HIV notifications in the non-Indigenous Australian-born population have remained stable for the fourth year in a row.

“ATISHAW is an opportunity to promote action at all levels of government to provide much needed resources to address the rising rates of HIV,” he said.

“Action is required in policy, programming, clinical service delivery, as well as education and improvements in health literacy across Indigenous communities across Australia.”

Over the last five years, significant differences have appeared in the HIV epidemic between Aboriginal and Torres Strait Islander populations and non-Indigenous Australians. Although men who have sex with men make up the majority of cases in both groups (60 per cent vs 80 per cent), a greater proportion of Indigenous cases are because of injecting drug use (16 per cent vs 3 per cent) and through heterosexual sex (21 per cent vs 14 per cent).

The overarching theme of ATSIHAW is ‘U AND ME CAN STOP HIV. This highlights the strengths of Aboriginal and Torres Strait Islander communities, and the role we can all play in preventing new HIV cases and improving the outcomes for people living with HIV. This year, ATSIHAW is holding around 60 community events across Australia at Aboriginal Community Controlled Health Services and other community services.

The number of ATSIHAW events this year demonstrates the growing sense of community responsibility in supporting this initiative and for spreading the awareness of the importance of HIV prevention.

Some high-profile ambassadors for ATSIHAW have also been recruited, including Steven Oliver from ABC’s Black Comedy. Steven said that he’s involved in ATSIHAW because he “wants to help fight and break down the stigma associated with HIV and those living with it.” Prof Kerry Arabena and Prof Pat Anderson are also Ambassadors for ATSIHAW alongside 30 other community people who are all concerned about HIV in our communities.

ATSIHIV.org.au, a new website launching today as part of ATSIHAW, will become the go-to resource for the Aboriginal and Torres Strait Islander community on HIV. It has been developed to provide the community with accessible and relevant information on HIV; how HIV is transmitted, HIV prevention, and how to provide care and support for people in the community who live with HIV.

The website contains clear information on the basics of HIV transmission risks, with strong emphasis on condom use, as well as information on new prevention tools such as Pre-Exposure Prophylaxis (PrEP) and on the role of treatment as prevention in preventing onward transmission. It has been designed to provide useful information on HIV testing, and tips and resources for dealing with an HIV diagnosis.

ATSIHIV.org.au has been developed by SAHMRI, with funding provided by the Commonwealth Department of Health. 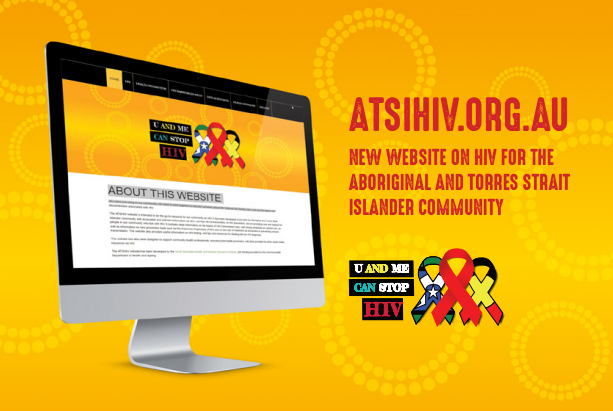